It's pretty hard to keep up these days. One of the reason I started this blog was because English language and non-Catalan papers hardly ever wrote about Catalonia. Now, when you google Catalonia, there are literally thousands of articles. It's wonderful and amazing. Here are some highlights though googling Catalonia is a good method too. What's the difference between this list and what you might find on Google? This list is organized by date and is static, while Google will only ever show you the most recent results. Plus, I'm going to try to pull out the interesting quotes.

The Guardian: Spanish PM rejects Catalan calls for greater tax powers
"Polls show Catalans are furious that they contribute 8% more in tax revenues than their region receives back from central government."

Reuters: Catalonia says tax impasse opens door to early regional vote
"Speaking in Catalan live on television after a meeting with Rajoy, Mas said he was disappointed by the talks."

Christian Science Monitor: After Spain nixes new fiscal deal, Catalonia considers independence push
"Others, though, warn this is the real thing and that Spain’s territorial integrity is in danger."

Lluís Brunet: Photo report from Lluís Brunet on the crowd that assembled to receive Mas upon his return from the meeting with Rajoy. 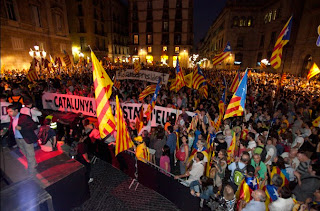 The Telegraph: Spain risks break-up as Mariano Rajoy stirs Catalan fury
"Diplomats say Mr Rajoy’s Partido Popular has provoked the latest eruption of fury by exploiting the economic crisis to break the power of the regions. This came to a head over the summer when Catalonia was forced to request a €5bn rescue from Madrid, though it is a net contributor to the Spanish state."

The New York Times: Spain’s Prime Minister Fails to Reach Revenue Deal With Catalonia
“The demands from Catalonia have developed a lot faster than anybody expected,” said Jordi Alberich, director general of the Cercle d’Economia, a Barcelona business organization. “A difficult crisis situation for Mr. Rajoy has just now got a lot more complex.”

Financial Times: No Progress in Catalonia-Madrid talks
"However, the impasse over the “fiscal pact” is creating momentum for a snap election in Catalonia that might be won by pro-independence forces and provoke a full-blown constitutional crisis in Spain."

AFP: Spain rejects Catalonia's bid for independence
"Catalonia feels it gets a raw deal from Madrid, providing much more to the central government than it receives at a time when it is making painful austerity cuts to health and education spending."

Euronews: Catalonia threatens early elections over tax dispute with Madrid
"The head of the regional government, Artur Mas, says a fairer tax system should be implemented as the region is contributing too much to Spain as a whole. The region claims that some EUR 16 billion a year of its taxes are used to fund central government and other parts of Spain."

Irish Times: Rajoy rejects Catalan call for greater autonomy
"The logistics of yesterday’s meeting highlighted the existing tensions, with Mr Mas giving his press conference afterwards in the Catalan regional government’s Madrid headquarters, rather than in the prime minister’s building as is customary. "

Bloomberg Business: One Europe: Many Tribes
(This article misses the point that Catalans tend to be very pro-Europe.)

Expatica: Spanish leader warns Catalonia over fiscal autonomy drive
"Fiercely proud of their distinct language and culture, Catalans increasingly feel they are getting a raw deal from Madrid."

And here on News Catalonia: Full Transcript of Catalan President Mas' Press Conference, after meeting with Spanish President Rajoy
"It did not go well."