CNN: Spain's next threat: Losing 20% of its economy, by Oliver Joy
"But then: "In 1981, after the military coup attempt, the monster woke up," the Columbia professor added. "All the Spanish institutions reinterpreted the constitution in ways that did not allow Catalunya to feel comfortable within that country."" 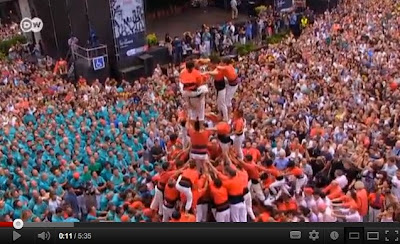 "Catalonian separatists are peaceful and democratic"

ANSAmed: Spain: anti-independence demonstrators protest in Barcelona
"Friday's demonstration mobilized about 6000 people from Valencia, Aragon, Madrid and other Spanish cities, according to police."
[Note the conspicuous absence of people from Barcelona in a Barcelona demonstration.]

The most interesting article perhaps was this one in El País (in Spanish) which showed the King reprimanding the Spanish Prime Minister for the Education Minister's comments this week saying it was his aim to "Spanish-ize Catalan school children". Interesting days.
Posted by Liz Castro at 7:29 PM