We've started talking (but it's not going well)

By Joan Carreras, and originally published on his blog. Reproduced here in English with permission. NB: I have added short descriptions to some of those quoted, who may be less known to an English speaking audience. The links go to Catalan and Spanish newspapers in which the quotes appeared. 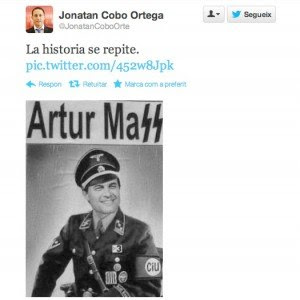 Quim Monzó laid bare today in an article the fallacy of a supposed equidistance that is based, above all, on the suggestion that we talk.

This is happening at the same time as many newspapers in Madrid avoid reporting on the agreement between the governments of Great Britain and Scotland, which is, in fact, the result of talking.

Sooner or later, I'm sure the governments of Spain and Catalonia will talk. After elections, of course.

But right now, there is another kind of talk, a conversation between citizens, politicians and politicians, among those who are in favor of having a referendum and those who think one should not take place. And I don't think it's going well.

I'm offering a minimal but sufficient sampling in order to prove that one side of the conversation, in particular, doesn't understand what dialog means.

"I'm in favor of Catalonia becoming a new State in Europe."

"No, it's not OK. Because you are an ETA terrorist (said Jaime Mayor Oreja [former Minister of the Interior]), you're a racist (said Alfonso Guerra [Socialist leader, former VP of Spain]), you're neither peaceful nor democratic (said Aleix Vidal-Quadras [People's Party, VP of EU Parliament]), you're putting Spain and Catalonia on a collision course (said Carme Chacón [Socialist leader, former Minister of Defense]), you want to divide the country, create social strife and poverty (said Alícia Sánchez-Camacho [leader of People's Party in Catalonia]), you're making people worried (said the Episcopal Conference), you want to sink Spain in the international marketplace (said the Minister of Foreign Affairs), you're going against Catalonia's interests (said Pere Navarro [current Socialist leader in Catalonia]), you want a country full of the mafia and gangsters (said Francesc de Carreras [professor, founder of unionist C's party]), you mean to recreate the Nazi Holocaust (this last was a tweet by a local PP councilor in Rubí that was quickly deleted but which lives on in screenshots). 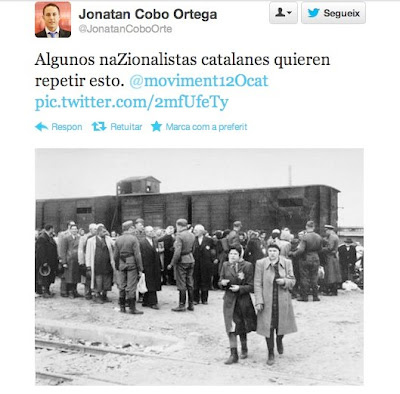 "Whoa, you don't have to be like that, man. We just want to have a referendum so that we can decide our future together."

"There is no need to have a referendum because we already decided (said Felipe González [former president of Spain]), we won't let you do it (said the PP General Secretary), the referendum is illegal and we'll put your president in jail (insinuations made by Pedro J. Ramírez [editor of El Mundo newspaper]), we'll have to declare a "state of war" (said a military colonel), we will keep you out of Europe for all eternity (said the Minister of Foreign Affairs), we have to Spanish-ize all Catalan school children (said the Minister of Education).

And that was just a small selection. There are so many examples on Twitter that people are having a party making up hashtags that illustrate how crazy some of the things people are saying are. [This particular one says "the day we declare independence, the street lights will no longer work, the sewers will collapse and the televisions will turn off. #madmax4"]

Given all of that, it's almost funny that the president of the Spanish government, Mariano Rajoy, said that wanting to hold a referendum is absolutely ridiculous.

You mean the most ridiculous thing of all isn't this collection of outrageous attacks? You want to talk? Well, come on. Let's start over.

"Hello. I'd like for Catalonia to become a new State in Europe and to do so, we'll have to have a referendum. Shall we talk about it?"