CBS' 60 Minutes broadcast a third Catalonia-related story last night, God's Architect, about Antoni Gaudí, the man behind Barcelona's Sagrada Família Church. The images (of course!) were fabulous and the information about the architecture was quite interesting. I didn't know, for example, that the façades were meant to tell a story, that there was a Japanese sculptor who has been working there for 35 years, that the same family of architects has been shepherding the process since the 30's, and that they had managed to salvage and use the models Gaudí had created and that had been destroyed during the Spanish Civil War by anarchists. 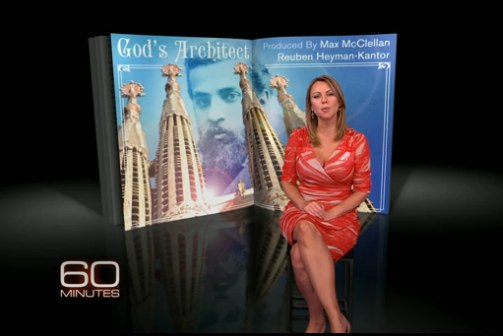 On the other hand, I found it pretty frustrating that CBS introduces Antoni Gaudí as a "Spanish architect" and never mentions the word "Catalonia" in the entire 12 minute piece. Catalonia was an integral part of Gaudí's personality and character. Imagine talking about Georgia O'Keefe without mentioning New Mexico, or Woody Allen without talking about New York.

The only political background that CBS offered were the pictures of chaos from the Spanish Civil War. They did not mention that Antoni Gaudí (please, accent on the i!) was as Catalan as he was Catholic, that he was beaten by police for participating in a Catalan language literary event called the Jocs Florals (1920) and when he was 72 years old, was beaten again for refusing to speak in Spanish during a protest against the banning of the Catalan language in 1924. Alfred Bosch asserts in a recent video that the four towers on each façade represent the four stripes in the Catalan flag.

Gijs van Hensbergen, the Gaudí biographer that CBS interviews for the piece wrote “For over forty years Franco's regime stifled the Catalan identity, concealing the meaning of Gaudí's work.”

By suppressing Gaudí's origins, CBS missed half the story. Even if they didn't want to delve into Catalan independence, you can't talk about Gaudí without explaining that he was from Reus, in southern Catalonia, and what it meant to be Catalan at the turn of the century. He was definitely not a Spanish architect. CBS' attempt to keep politics—and Catalonia—out of the story is in itself a political act.
Posted by Liz Castro at 7:44 AM