Concepció Soriano (Barcelona, 1941) is a grandmother and a human tower builder, and member of the Castellers de Barcelona team. Her job as a human tower builder is to serve as a "plug", that is, to fill the holes that are left in the base of the tower between the radial spokes. As far in as they need her, she says. This September 11th, her picture went around the world as the image of Catalonia's National Day. She was one of the Wall Street Journal's photographs of the day. 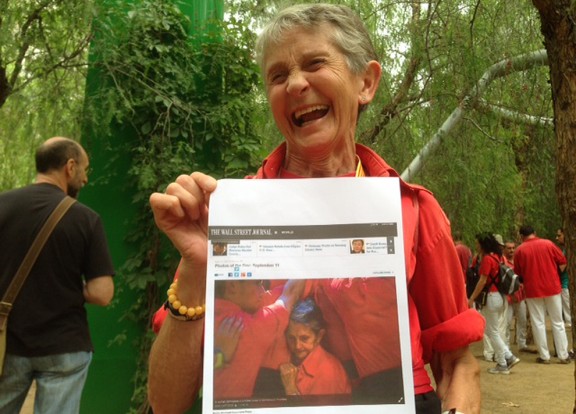 Concepción Soriano holds a print out of her picture in the Wall Street Journal. Photo: S.C./Nació Digital

Did you imagine all this fuss? Who told you that this photograph had come out?
People were calling me all day on Friday, but I was very busy with my grandchildren since school hadn't started yet and I didn't pick up the phone. In the evening, when I got to Castellers practice, my team members were waiting for me in the street. I was very touched. Everyone was hugging and kissing me! It was really amazing, to tell the truth.

And when you saw the photograph, what did you think?
It made me really happy, but I'm just one of the people on the team...

But it's not just that you're the face of Barcelona's human tower building team, the Wall Street Journal chose you as the symbol of Catalonia's V for Vote demonstration!
Well, that makes me very proud at my age. I'm 73, I won't fool you. I called my son-in-law, who's studying in the US and who knows that country well. "Of course I know what paper it is!" he told me.

And how did you celebrate the day?
We were at the vertex of the V. I went with a friend to hold the banner for the Barça booster club, but I left her for a moment because they needed me for the tower. It was awesome, really nice. I hope we win! On November 8th, my daughter is getting married and it would make me really happy to go vote the next day.

Have you been part of the Castellers de Barcelona team for a long time?
No, no. About six years. Apart from being on the human tower team, I'm a volunteer, since the 92 Olympics. I made a lot of friends there who were human tower builders and after seeing them during the festivals so many years, I decided to join.

What's your job on the team?
I'm a plug, I fill in the holes that remain in the base of the tower [between the spokes], and since I'm really small, I can get really far in.

You also brought another member of your family to the team, a granddaughter...
Yes, when I went to practice, I brought her with me and she just played. But then I saw that she liked it, and she wasn't afraid, and pretty soon she was climbing pillars (one-person-per-storey towers). I signed her up but now she is six and I don't know if she'll want to keep doing it.

What did she say about the photo?
Oh, she just got home from vacation and hasn't seen it yet.
Posted by Liz Castro at 5:29 PM