This article was written by Manuel Cuyàs in El Punt Avui. He kindly agreed to let me publish this translation here.

I go into Barcelona to participate in the V demonstration, and after wandering about the Arc de Triomf for a few minutes, I find my cousins from Tarragona. I tease them: I thought you wouldn't miss the meeting of unionists in the amphitheater. The unionists hope to convert Tarragona into Àlaba, the most Spanish and castilianized of the Basque provinces, but seated in the stands of the amphitheater, they look much more like schoolchildren on a field trip. Afterwards, I find other cousins and acquaintances and also people I'm not acquainted with at all, as I make my way around the Born, the Fossar de les Moreres, Argenteria street, the Plaça de Sant Jaume, Ferran street, the Plaça Reial, and the Rambla. 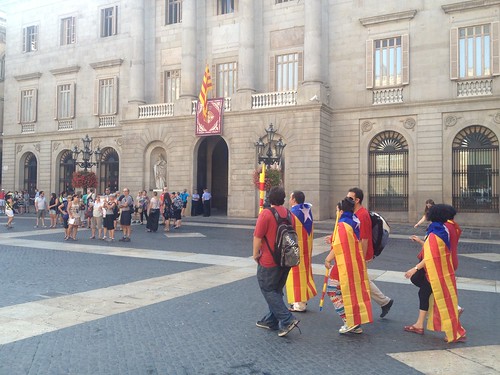 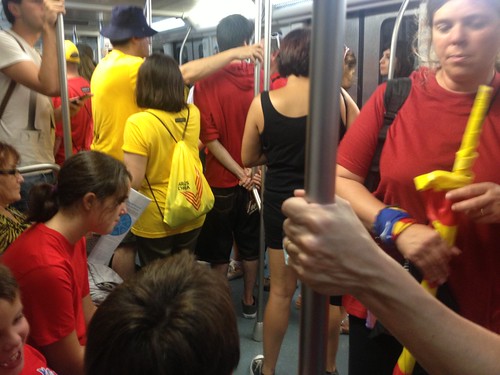 The impressive photographs of the V will overshadow these other, previous human compositions: people dressed in yellow and red filling restaurants at lunchtime, going in and out of cafés, walking up and down the streets. Today, if you get or give a shove to someone walking by, people are smiling instead of grumbling about where you think you're going. Everyone knows where they're going and is aware that the concentration that awaits them for the afternoon will involve lots of bumping into each other. There are a lot of us and we don't fit in Barcelona. 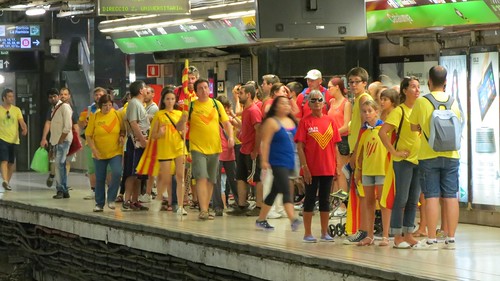 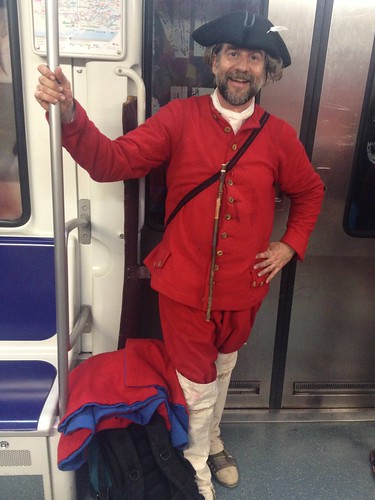 The organization, the ANC and Òmnium Cultural, had said that at 4pm, one hour before the climax at 17:14h (5:14pm), everyone has to be in his or her place on the Gran Via and Diagonal. We must be the most disciplined people in the world because between half past three and quarter to four, all of us who had been wandering aimlessly around the streets begin heading to the meeting points.

We are moved by discipline and something more: appreciation for the organizers who had thought of everything and foreseen every possibility. We can’t let them down. To organize much less complicated things, others contract specialists and outside experts. The V requires a profusion of trains and buses, calculations, t-shirt sales, the willingness of men and women to form the four bars of our flag, all of which is the product of the work of many volunteers. I thought that waiting for an hour in the hot sun was going to be a drag, but I hadn't counted on my cousins, acquaintances and non-acquaintances who made it a breeze. Five, four, three, two, one... 17:14. 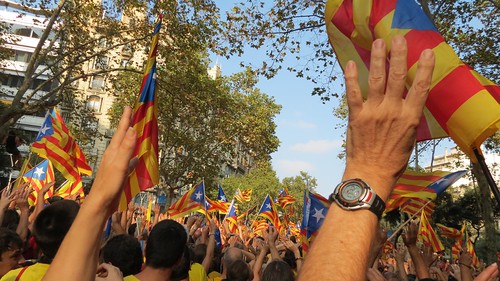 The unanimous demand: "independence". Polls say that 75% of Catalans want to vote. Here, with almost 2 million people, that's 25% of the population. I don't know what the others—the ones who at that moment were at the beach, at home, or on a walk—plan to vote. The ones on the Gran Via and the Diagonal want to vote Yes for independence. The ones who simply don't want to vote were in Tarragona's amphitheater. 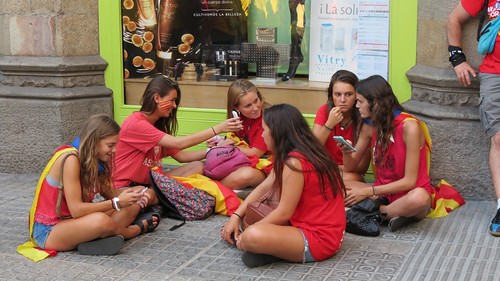 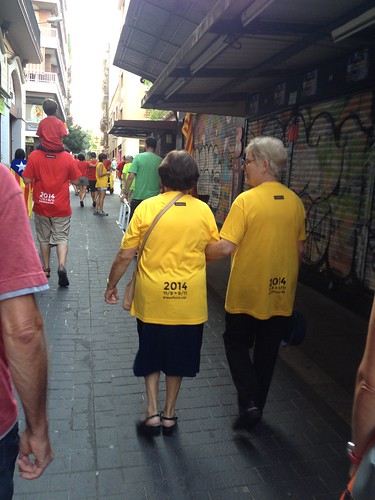